Sri Lanka was one of the first countries to establish diplomatic relations with Cuba soon after its revolutionary leader Fidel Castro took power in 1959. Even though Castro could not visit Sri Lanka during his five-decade long reign as Cuba’s leader, the visit to Ceylon (Sri Lanka) by his special emissary Ernesto ‘Che’ Guevara set the stage for an enduring relationship between the two countries.

Che Guevara’s visit to Sri Lanka took place in August 1959, soon after the two countries established diplomatic relations, to promote the sugar trade. While here, Guevara also took a look at the rubber planting methods in the country by visiting the Yahala Kele rubber estate in Horana. There he planted a Mahogany tree on 7 August 1959, which still stands as testimony to the visit to Ceylon by the legendary Argentinean revolutionary who spearheaded the Cuban revolution along with Castro. 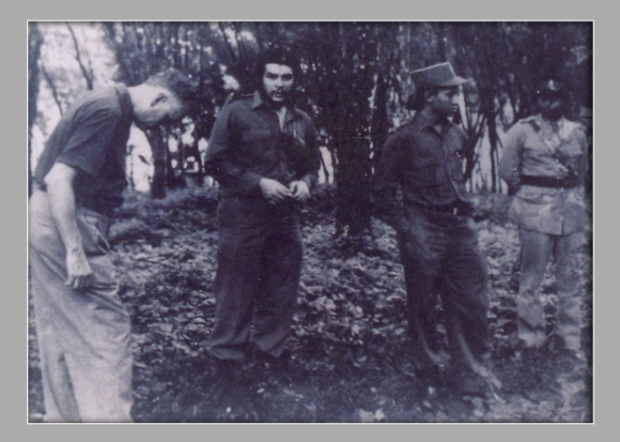 Che at the Yahala Kele Estate in Horana

Che’s visit was part of a study tour he undertook to several countries in Asia, which also took him to India. Sri Lanka is one of the few countries Guevara visited in his lifetime. At the time of his visit to Ceylon, he was the Minister of Industry.

One of the people Che Guevara met on his brief visit to Ceylon was James T. Rutnam of Colombo, who imported sugar from a company called Galban Lobo Trading Company based in Havana.

“After the Cuban revolution, Julio Lobo – a great sugar tycoon – fled Havana and resided in New York. Fidel Castro sent his right hand man Che Guevera to all the countries that formerly imported sugar from Cuba. Ceylon was one of them,” said Jayam Rutnam, son of James T. Rutnam.

Che Guevara had been appointed as the Governor of the Cuban Central Bank and had nationalised the sugar plantations but the revolutionary Government was eager to ensure that the sugar trade continued uninterrupted under the new regime.

“Che Guevera and his interpreter visited my father in 1959 to persuade him to continue to import sugar from Cubazucar in Havana. I remember seeing this scruffy, unshaven man, with breakfast stains on his uniform, who was seated in our living room with his beautiful Cuban female interpreter. I didn’t pay much attention to him since he only became famous later,” Jayam Rutnam recalls.

After Che went back to Havana, the USSR had announced they will purchase all sugar from Cuba. “That was the end to my father’s business deal with Che, Fidel and Cuba,” says Rutnam.

Fifty-seven years later, the visit to Ceylon by Che Guevara, the special emissary of the late Cuban leader Fidel Castro, continues to be a highpoint in relations between the two countries .

Sela is not your typical business theme. Vibrant, bold, and clean, with lots of space for large images, it’s a perfect canvas to tell your company’s story.
Sela is responsive, which means it adapts to any screen, providing your visitors with a great browsing experience on any device.